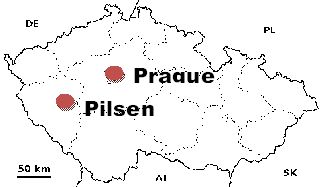 All the members of the Comenius Project Green Way came to the frosty city of Pilsen. There were 11 students and 11 teachers from 5 countries.

They were welcomed by Czech students and their families as well as by Czech teachers at the Sports Grammar School in Pilsen.

The programme for the students and teachers was very busy.

The weather was nice, but the temperatures were below zero, it was very cold.

Air pollution and public transport were the main topics of this meeting.

All the students had the presentations on these topics.

The students were also working on the charts about water usage in different countries. They compared their average daily consumption per head.

The visitors were informed about the Czech school system.

Czech students guided all the teams through the school building. There was a dancing performance prepared by the Czech students. They also saw judo and athletic lessons in the gyms.

The teams were singing the anthem of the Green Way Team in their own languages. Great fun!

The teachers were planning other meetings and activities. They visited the City Hall in the Square of the Republic, the students made the project about the city of Pilsen.

All the teams enjoyed the visit to the Pilsen Brewery and the capital city – Prague, where they saw the station for the air pollution measurement.

The information about alternative sources of energy at West Bohemian University was a little bit demanding.